It had been over two years since my last half marathon. Prior to the race, I wondered how fast I would manage to run. Turns out, I set a personal record. In cheesiness. 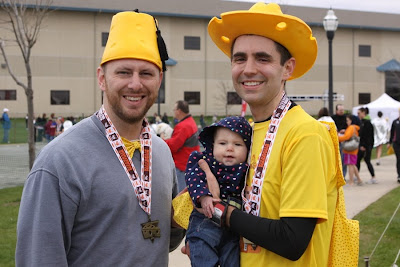 The back-story is here. Photos are here. Ben’s recap is here. A video recap of the event is here. 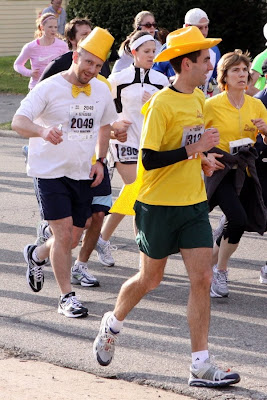 I’m also sad to report that Ben and I finished a combined eighteen minutes and thirty-six seconds slower than our target combined time of six hours (his marathon time plus my half marathon time).

I fell off the target pace roughly two and a half miles into my run. Ben ran a great race and finished faster than his target time. All things considered, I ran a solid race, even though I’d envisioned running with Ben for several more miles. The marathon and half marathon courses diverged after twelve miles, just over a mile before my race headed toward the finish.

We raised hundreds of dollars in pledges to assist relief efforts in Japan and Egypt, and we had a great time doing it.

Any way you slice it, this was one of cheesiest, funnest and most memorable events in recent memory!
Posted by drh at 6:22 PM

Which posts have been most popular over the past month?

Take the number below. Subtract one. Learn how many times this week I’ve visited W&O myself.

The following headlines, which are automatically updated regularly, were written by people who have better things to do than to read my blog. As a result, an occasional headline may be incongruous with the family-friendly principles upon which this blog was founded. If that happens, feel free to check back a little later.